The Sea of Cortez at its best

An Eden of Life

Our sea is commonly known by three names: the Gulf of California, the Sea of Cortez...or the Aquarium of the World!
The latter was bestowed by Jaques Cousteau, the famous oceanographer, after his exploration voyages across the waters that surround Baja. This is still true, and only a few places in the world boast such an outstanding variety of marine life.
The Sea of Cortez is kinda unique. Its a huge, closed body of water with its own climate, only connected to the open sea on its southern end, where it becomes the Pacific ocean. This has created a tropical-like habitat for thousands of colorful reef fishes, yet still being home for other animals from the cooler Pacific.
It's easy to encounter large amounts of warm water fish like the angelfish, butterflyfish, surgeonfish, moorish idols and other tropical fauna. They will provide an ever present touch of color in every dive!
At the same time, expect to see turtles, rays under and over the water (yes, they jump!), lots of nudibranchs and macro life and schooling fish like jacks and barracudas. 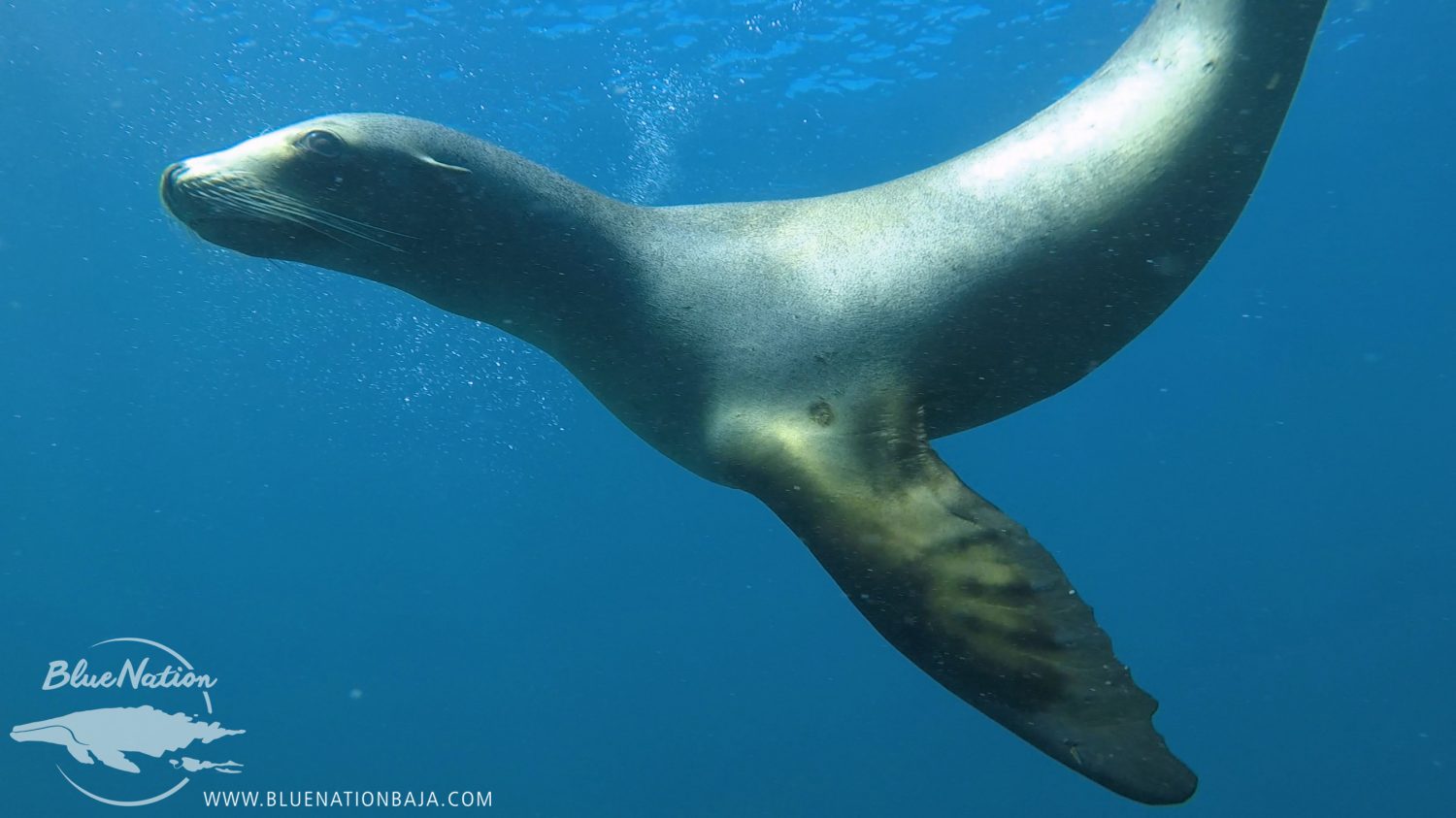 If you are one of those people that doesn't like to strain your eyes looking for the tiny stuff, this might as well be your lucky day!
Loreto National Park counts with two sea lion colonies where you can easily make new friends (at a low cost of letting them chew the tip of your fins). These fun fellows are here all year round! Yay!
Mobula rays roam these waters and sometimes they put on a show by jumping out of the water in the most spectacular manner. Huge schools of them (hundreds I tell ya!) can be encountered from May to August more frequently.
Another cool inhabitante of the Cortez is the dolphin. Large pods of them frequently wander about and it's not unusual to have several dozens of these animals chasing and jumpingn over the boat's wake. You might even see them underwater during a dive!
You want bigger still? No probs! Whalesharks come in big numbers to the Sea of Cortez, and with a bit of luck you might even have the chance to snorkel with one of them. Winter and spring months are usually the best to see these gentle giants, that can be found easily in La Paz.
Whales. You can not go bigger than that! Loreto is one of the best destinations in the world to see the blue whale, fin whales and even humpback whales. Gray whales and their calves can also be seen a couple of hours from Loreto.
The best season for whale watching are the winter and spring months, although you might be able to see some in the late autumn.

Although Loreto has been traditionally known for its migratory cetaceans and jumping mobulas, its true diversity is hidden well beneath the surface. There is a hugel world down there populated by the tiniest inhabitants, so rich with life that will make you forget about the big stuff. Dozens of different types of nudibranchs of all colors, sea slugs, flat worms, crustaceans and tiny fish can be found in great quantities almost in every dive. 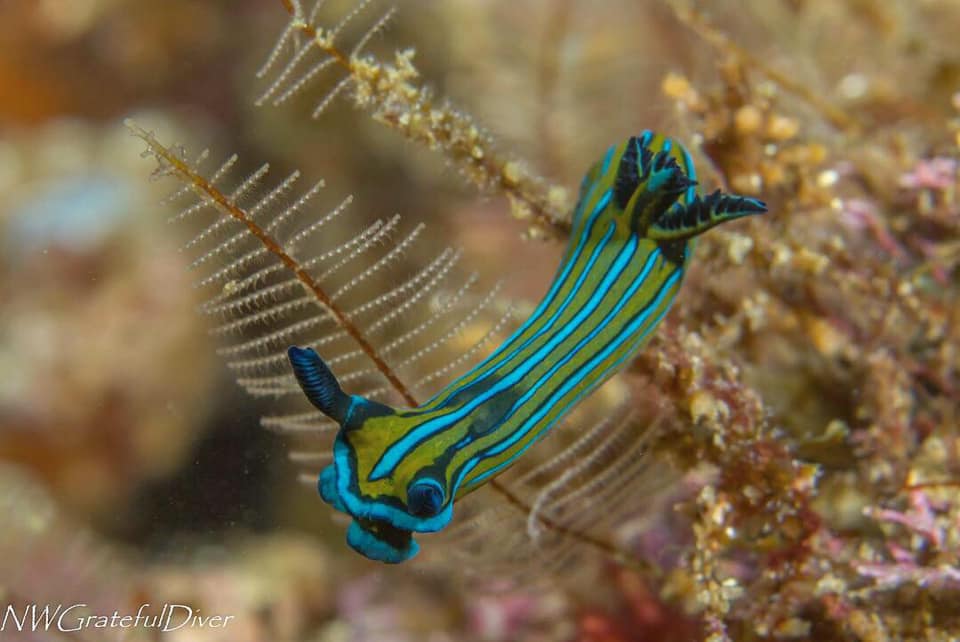 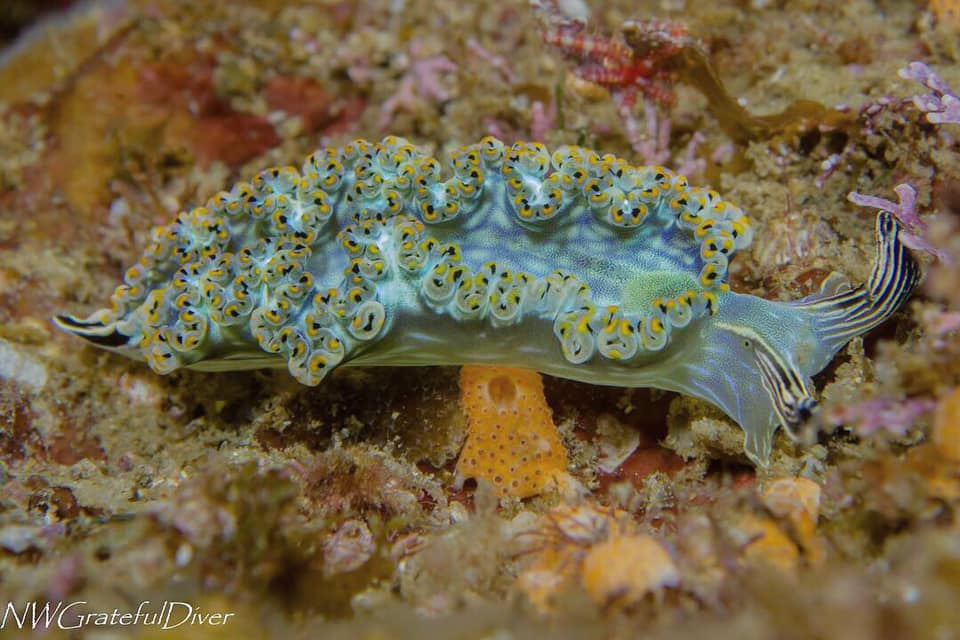 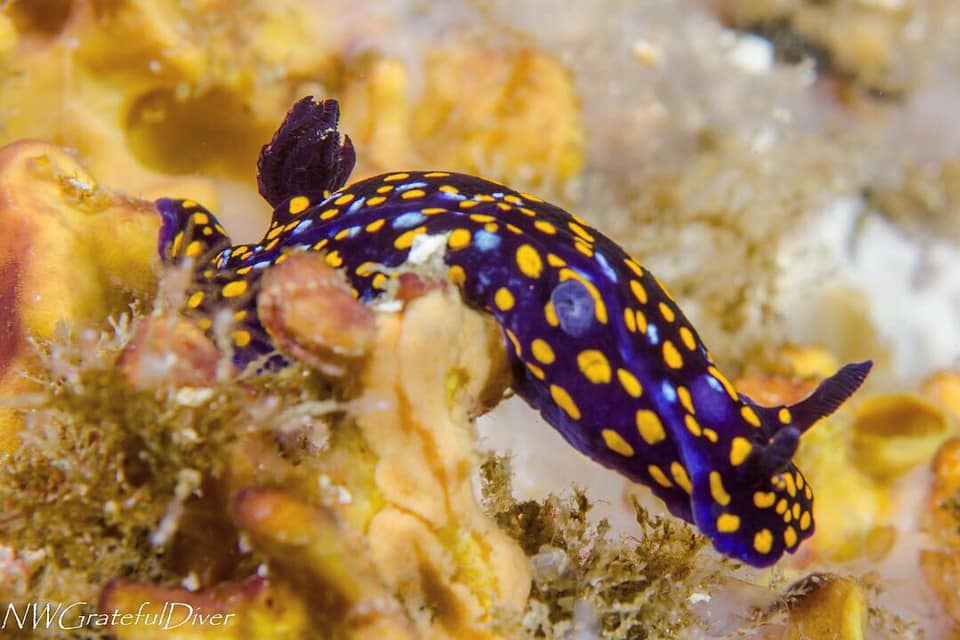 Hey, these are animals too!

The Aquarium of the World can't be complete without its own great botanical garden! Although that statement may not be too accurate (corals are no plants!), it does look like a garden down there. And a very colorful one!
There might not be extensive hard coral reefs like the ones you could find in the Caribbean, but the amount of nutrients and currents in our waters create an ideal home for soft coral, like gorgonias, sea fans, and black coral.
Thick forests of black coral can be found deep (and sometimes not that deep), some other times sea fans decorate the walls of the reef, and often small hard coral patches speckle the rocky reefs.
A garden, let me tell ya, with its flowers and a micro-universe to discover! 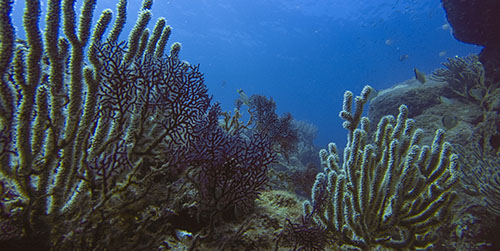 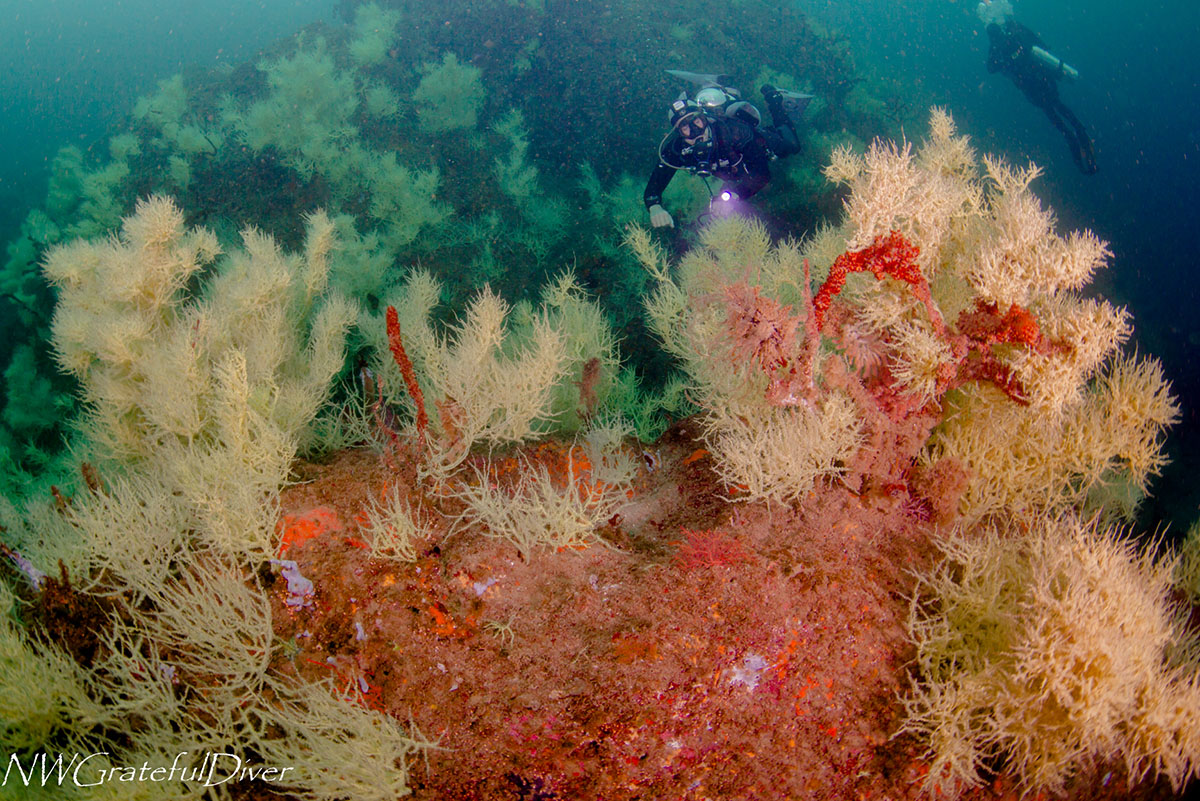 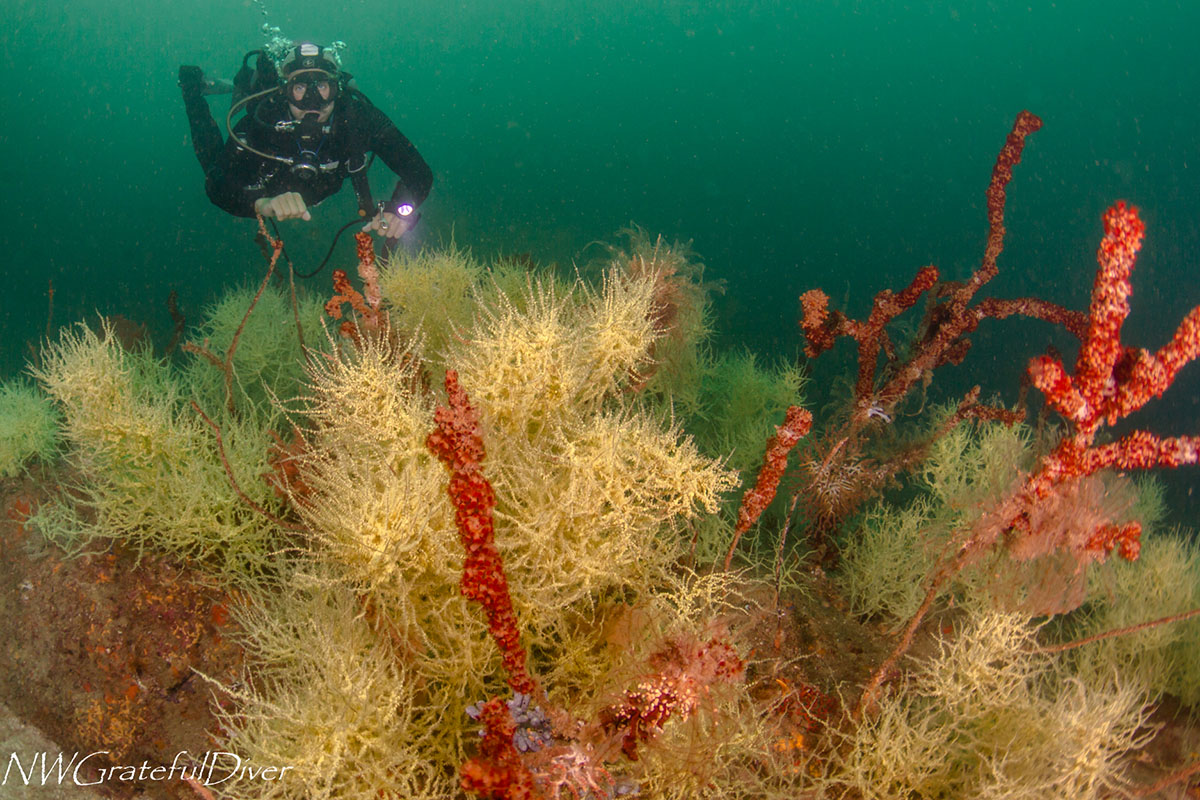 A diver does not only live of fish! There is much to discover in the forgotten depths of Loreto. The geological history of Baja is a dramatic one. Great tectonic changes and volcanic action have shaped the face of Baja California. Within the Loreto Bay National Park we can find volcanoes, solidified lava walls, great sea caverns, steep and deep walls, pinnacles and several sea mounts...you name it, really!
The variety of divesites and unique sceneries seem endless. Even if you don't see any fish (not that it would happen anyway) you would still enjoy a jaw dropping landscape, and even a couple of nice wrecks!
With 3 main islands and several islets to choose among, you won't likely run out of options anytime soon.

A glimpse of our underwater wealth

Looking for a specific species you don't want to miss? Click on this image to find the best times of the year for each species. 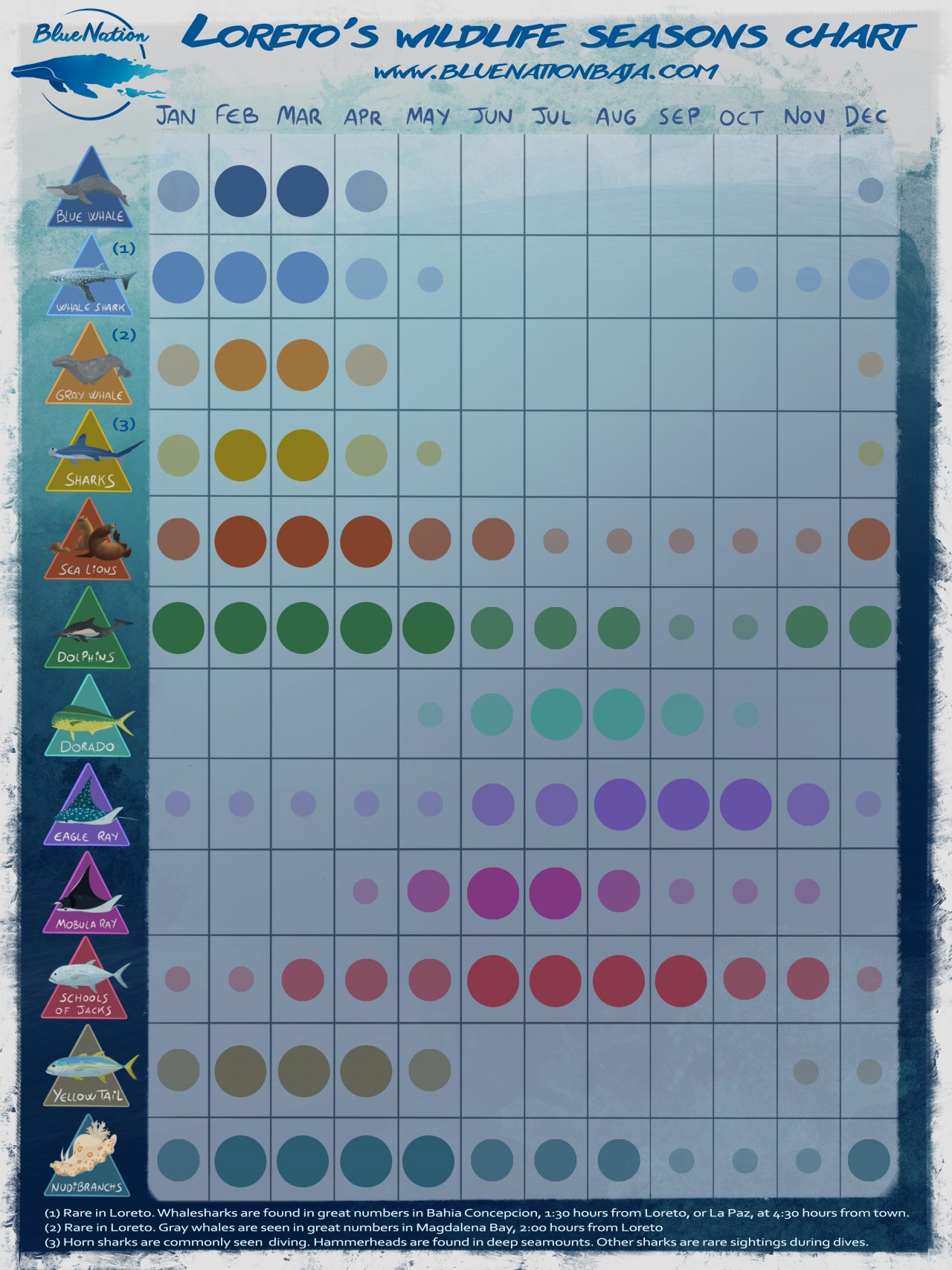