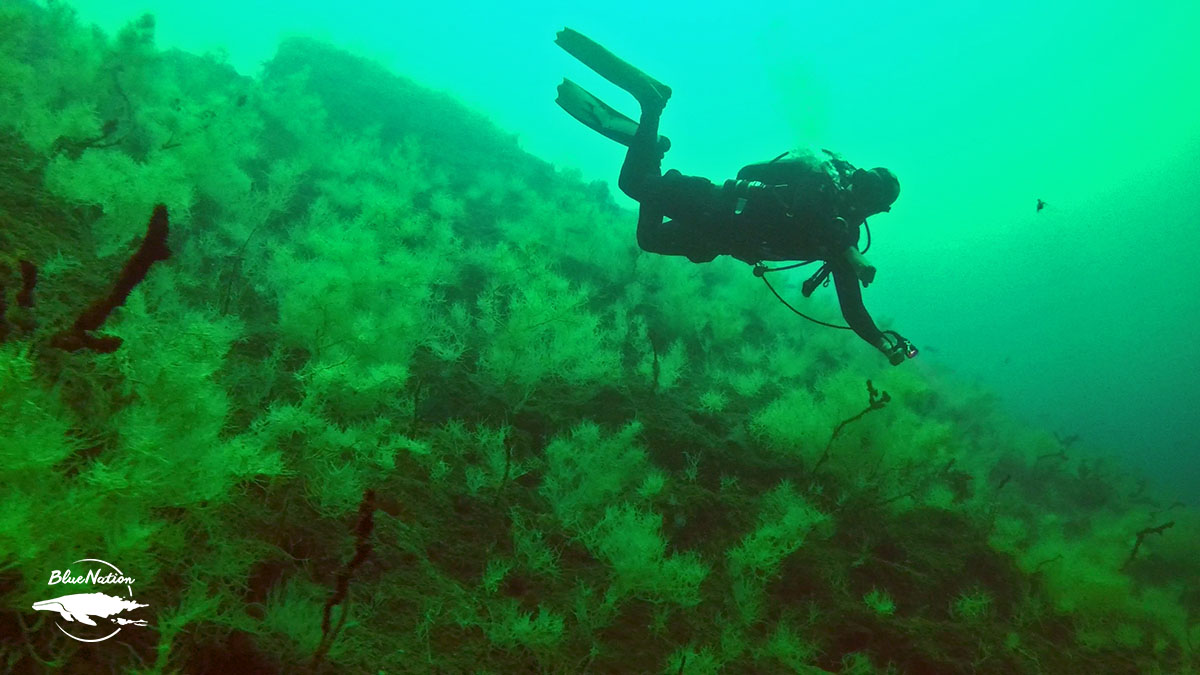 In the late April 2019, the expedition took us north of Loreto, beyond the limits of the National Park. In the past we have sought that area as the topography (both under and above water) is spectacular and has gifted us with some amazing dive sites.

On the way we were greeted by 3 humpback whales and hundreds of common dolphins, which seemed to be at ease with the dive boat and accopanied us for a long while.

This time we were looking for deep underwater walls, and we had a few sites in our list. Most of the time we search for new divesites we find short drops and shallow reefs, some of them make for excellent dive sites, but the adventurer in us can not help but to hope for something bigger…the mother of all walls.

As per usual, we slow down as we approached our destination. A previous research of the area showed an interesting topography and geology, of that kind that might actually lead to underwater terraces that might drop deep. As we got closer, we turned our depth finder on, and started scanning the bottom profile. The screen showed a nice, flat rocky plateau, and with almost no slope, a good sign! We carried on scanning towards the open sea, hoping to find the edge of the platform. After a short while we started to lose hope, as we have seen these flat plateaus before, where they gradually start to slope deeper until they end into the sandy bottom. If this were to be the case, it would have been another failed survey…all the sudden, we notice a change in our screen. A huge drop.

We didn’t wait. We geared up as fast as we could, did our checks and descended into the rocky plateau. We hit the bottom at around 7 meters, and started swimming towards the edge. After a few minutes, we found it:

A huge, steep and almost vertical drop, going as deep as we could see. We started descending along it, keeping a good eye on our computers and gauges, as we dodn’t know what to expect and how far we would plummet. After a minute or two, our jaw dropped. The rocky surface has disappeared and everything have turned emerald green. A huge, endless black coral forest stretched out down the wall, and then, along the bottom into de depths.

When we finally hit the bottom we were at 30 meters (110 feet) deep, and the sand, covered in corals kept going down, smoothly now. What a view.

We swam along the wall for 25 minutes, the scenery was amazing, and the view of the sheer wall, covered with coral as far as the eye can reach made the dive feel unreal. We discovered a huge turtle under a ledge, and another two swimming in the vecinity. At apoint we were surrounded with a huge school of juvenile jacks. Wow. A bit later, the wall started to go shallower and the topography became more gentle and less vertical. What a perfect way to start the ascent. We hovered over the top of the shelf, where we encountered dozens of nudibranches.

At the surface, we look to each other with a big smile on our face. It might not be the mother of of walls, but it’s one of the largest and most spectacular ones we have ever seen. We spent the next while discussing about how to name this site, “Emerald Glory” and “Emerald Abyss” sounded epic enough and describe the site well. I think we will stick with the later for the time being! We’ll definetely come back soon.

Thanks to Monica, Gloria, Bob, Peter, Christine and Yago for having shared these couple of survey dives.